Sub-national planning
Local councils, and other bodies involved in writing planning policies and influencing decisions on planning applications, have to work together to make sure that development issues that cross council boundaries are dealt with properly.

Neighbourhood planning
The Government has recently introduced a new tier of planning which sits below local planning. If they choose to, your community can now prepare a Neighbourhood Development Plan, which would sit alongside the local plan as part of the development plan for your area.

Parish Plan
This reflects the local vision of how local residents would like to see your area change in coming years. Parish Plans can be much broader than neighbourhood plans, covering more than just planning issues. This optional document is more community-led and can reflect the needs of an individual town or village and surrounding countryside.
​
Village Design Statement
You can use Village Design Statements as a tool to make sure that new development in your village respects the distinctive visual character of the place.

The JCS was formed to produce a co-ordinated strategic development plan to show how this area will develop during the period up to 2031.

A cursory look at the boundaries of the three Authorities shows clearly that any significant increase in homes centred upon Gloucester or Cheltenham must be located within Tewkesbury Borough, thus making the need to co-operate imperative. The government has recently introduced a ‘Duty to Co-operate’ between public authorities but this co-operation started before it became compulsory.

The JCS is steered by officers and elected members from each of the three local authorities.

The process of developing the JCS started in 2008 and has yet to finish. In the submitted JCS adoption was anticipated in Autumn 2015 so it is running very late!

The submitted JCS version to the Planning Inspectorate was in November 2014 and an Inspector assigned to examine the Plan for “soundness” prior to adoption. Various adjustments have been made, some involving changes to assigned sites of proposed housing development.

The Inspector produced an interim report on 31st May 2016 which proposed “Main Modifications” requiring acceptance by all three Authorities. Among these is the acceptance of a raised housing total to 35,175 (inclusive of a 5% uplift to boost affordable housing) together with assignment of a Twigworth housing development site for 995 units.

All three Authorities challenged the increased housing total, to no avail, and Tewkesbury initially declined to assign the site at Twigworth.
Those arguments against including the Twigworth site were supported by Professor Cluckie, emeritus professor of Engineering at Swansea University and an acknowledged authority on flooding! However, the advice of contracted flooding specialists was that the site could be developed with appropriate safeguards.

All “Main Modifications” were accepted first by Cheltenham and Gloucester then finally, with a modest majority, by Tewkesbury!
The consequences of not accepting the “Main Modifications” risked the Inspector almost certainly not declaring the JCS “sound” and it not being adopted. There was the potential loss of Government “New Homes Bonus” for Tewkesbury alone worth £3.2m. A Tewkesbury Borough Local Plan development process would have to fully replace the JCS work. There would be an extended period when developers would have carte-blanche to seek development approval wherever they chose. These threats clearly swayed opinion.

To follow the Tewkesbury Council’s agonized debate on these matters see here and here.

These “Main Modifications” will go out for public consultation between 27/2 and 10/4/17.

One of the recent stumbling blocks from Tewkesbury’s perspective has been the MOD’s ambivalence concerning its release of Ashchurch Camp site for housing (2125 units were assigned there in the submitted  JCS). The MOD have recently confirmed it will not be released as hoped. It has now been taken out of the JCS although some reduced allocation may be possible in the future.

Question marks remain concerning Fiddington, a potential site for 900 units, and although not included in the “Main Modifications” due to transport and infrastructure issues yet to be fully determined, it is given a “Reserved Site” status so may be the subject of future consideration.

Land to the north of Mitton and within the Wychavon Borough is the subject of an agreement between Wychavon and Tewkesbury that 500 units there be a contribution towards Tewkesbury’s housing requirements. A potential further 600 could contribute to a future review of South Worcestershire’s Development Plan.

Many more details and documents links, including the submitted version, are to be found on the JCS website: http://www.gct-jcs.org/​
The TBC Local Plan (Tewkesbury Borough Plan)

The Tewkesbury Borough Plan forms part of the hierarchy of planning guidance and will sit ‘underneath’ the higher level Joint Core Strategy and national planning policies.

Whilst the Joint Core Strategy identifies larger sites for housing and employment, and deals with important issues such as Green Belt, flooding and transport, the Tewkesbury Borough Plan will identify the additional specific locations for smaller-scale growth and set out how protection of our key assets, such as our valuable countryside, our historic heritage and our open spaces is to be achieved.

Policies need to be up to date to be useful in guiding planning decisions. The adopted Tewkesbury Borough Local Plan covered the period 1991-2011. While most of these policies were ‘saved’ (i.e. they are still legally capable of being used in decision making until a new plan is adopted) it needs to be replaced by a plan that takes into account changes in local and national circumstances.

The “old” adopted Tewkesbury Local Plan can be viewed here.

Neighbourhood Planning was first introduced in the Localism Act 2011 and Tewkesbury Borough Council has a duty to support communities in making their neighbourhood plan.

A growing number of parish/town councils, including Tewkesbury Town Council, in the borough have registered their intention to take up the challenge of preparing a neighbourhood development plan.

A Neighbourhood Plan should support the strategic development needs set out in the JCS and Borough Plan.

However, NPs do require considerable human resources and significant financial support and it becomes a matter of enthusiasm and judgement as to whether to invest these or not. In many instances where NPs have progressed there is a “threat” that inspires the effort. Tewkesbury Town has started the process but without the motivation of a generally recognised “threat” so perhaps that is why support and progress has been spasmodic to say the least.

It is doubtful whether the project will deliver anything.

It is questionable whether a Parish Plan would be more appropriate?

A graphical representation of the Planning hierarchy locally: 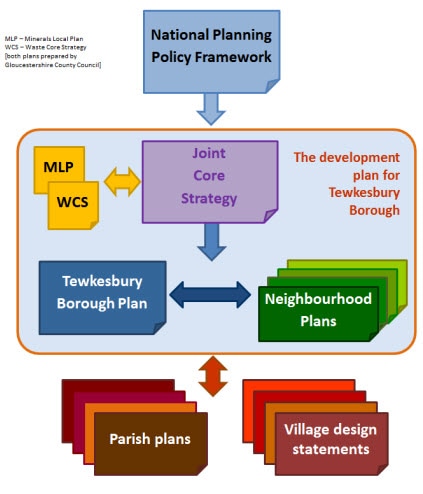